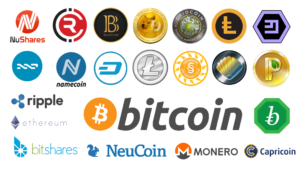 Cryptocurrencies or virtual currencies are type of an regulated digital money. They are manly decentralized peer to peer system and transacted between users directly without an intermediary. These transactions are verified by network nodes and recorded in public distributed ledger called blockchain.

They are neither issued by Central Bank nor it is attached to flat currency, but it is used and accepted among the members of a specific virtual community. They are being transferred stored or traded electronically.

A cryptocurrency is a system that meets six conditions:-