(iii) Which one of the following is not a minor relief feature in the oceans:
(a) Seamount (b) Atoll  (c) Oceanic Deep (d) Guyot

(v) Which one of the following is the smallest ocean:
(a) Indian Ocean (b) Arctic Ocean (c) Atlantic Ocean (d) Pacific Ocean

2. Answer the following questions in about 30 words.

(i) Why do we call the earth a Blue Planet?

Ans. The Earth has an abundant supply of water on its surface. Water is an essential component of all life forms that exist over the surface of the earth. Hence, our planet is called the ‘Blue Planet’.

(ii) What is a continental margin?

Ans. Continental margin is also called as Continental Shelf. It is called as as margin because it is the extended margin of each continent occupied by relatively shallow seas and gulfs.

(iii) List out the deepest trenches of various oceans.

Ans. Here is a list of various points that mark deepest points of oceans.

There are 57 deeps have been explored so far; of which 32 are in the Pacific Ocean; 19 in the Atlantic Ocean and 6 in the Indian Ocean.

(iv) What is a thermocline?

Ans. Thermocline is a boundary region, from where there is a rapid decrease of temperature of the ocean water. About 90 per cent of the total volume of water is found below the thermocline in the deep ocean. It is also the second layer of ocean water from surface to the bottom. 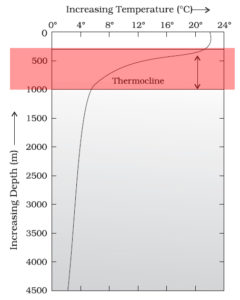 (v) When you move into the ocean what thermal layers would you encounter? Why the temperature varies with depth?

Ans. The temperature structure of oceans water can be described as a three-layer system from surface to the bottom.

The first layer represents the top layer of warm oceanic water and it is about 500m thick with temperatures ranging between 20° and 25° C.

The third layer is very cold and extends up to the deep ocean floor. 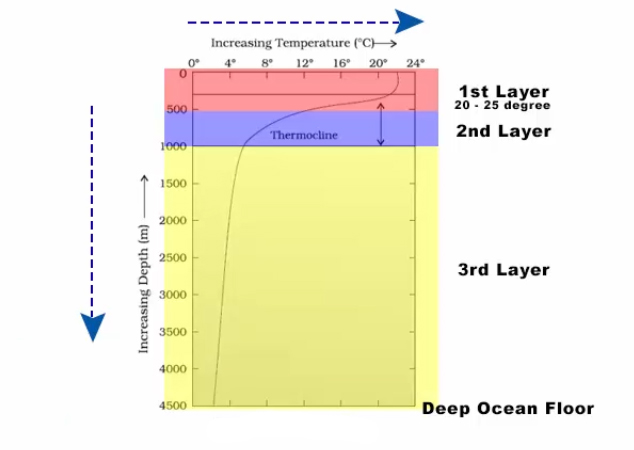 (vi) What is salinity of sea water?

Ans. Salinity is the term used to define the total content of dissolved salts in sea water. It is calculated as the amount of salt (in gm) dissolved in 1,000 gm (1 kg) of seawater. It is usually expressed as parts per thousand (o/oo) or ppt.

3. Answer the following questions in about 150 words.

(i) How are various elements of the hydrological cycle interrelated?

Runoff: it is the water flowing over the land making its way towards rivers, lakes, oceans etc.

Precipitation: It is the fall of moisture from atmosphere to the earth’s surface in the form of rain, hail, snow, sleet, glaze, drizzle, snow flakes.

Condensation: It is the conversion of a water vapor or gas to a liquid.

Transpiration: it is the evaporation taking place from any plant or greenery. Example, water droplet on a leaf getting evaporated into atmosphere

Infiltration: it is the process of filtration of water to the inner layers of soil based on its structure and nature.

Process of hydrological cycle starts at oceans. Water in oceans gets evaporated due to heat energy provided by Sun and forms water vapor. This water vapor moves upwards to higher altitudes forming clouds. Most of the clouds condense and precipitate in the form of rain, hail, snow, sleet. Some part of clouds is move towards the land by winds. Precipitation cause the clouds to fall on to the ground and even there some part of it evaporates back to atmosphere.

Portion of water that reaches the ground, enters the earth’s surface infiltrating various layers of soil and enriching the moisture content as well as water table. Trees and plants sends a portion of water from earth’s surface back to atmosphere through the process of transpiration. Once water percolates and infiltrates the earth’s surface, runoff is formed over the land, flowing through the contours of land heading towards rivers and lakes and finally joins into oceans.. Some amount of water is retained underground in the form of ground table storage. This cyclic process continues and has been going on for billions of years on Earth. 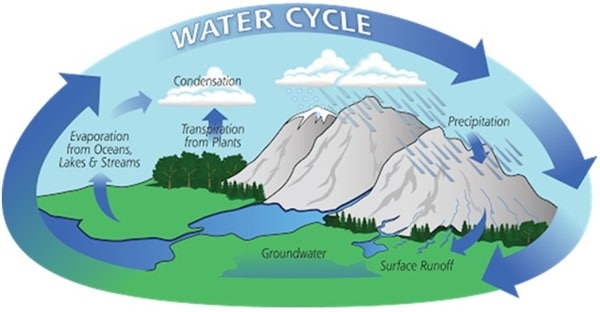 (ii) Examine the factors that influence the temperature distribution of the oceans.

Ans. The factors which affect the distribution of temperature of ocean water are :

(i) Latitude : the temperature of surface water decreases from the equator towards the poles because the amount of insolation decreases poleward.

(iii) Prevailing wind : the winds blowing from the land towards the oceans drive warm surface water away form the coast resulting in the upwelling of cold water from below. It results into the longitudinal variation in the temperature. Contrary to this, the onshore winds pile up warm water near the coast and this raises the temperature.