(iii) The direction of wind around a low pressure in northern hemisphere is:

(iv) Which one of the following is the source region for the formation of air masses?

2. Answer the following questions in about 30 words.

(i) What is the unit used in measuring pressure? Why is the pressure measured at station level reduced to the sea level in preparation of weather maps?

Ans. Pressure is expressed in units of millibar (mb) and Pascals. In order to eliminate the effect of altitude while comparing different isobars, pressure measured at station level is reduced to sea level in preparation of weather maps.

(ii) While the pressure gradient force is from north to south, i.e. from the subtropical high pressure to the equator in the northern hemisphere, why are the winds north easterlies in the tropics.

(iii) What are the geostrophic winds?

Ans. Winds in the upper atmosphere i.e. 2 – 3 km above the surface are free from earth’s frictional effect. They are totally controlled by pressure gradient and Coriolis force. These winds which are  straight and parallel to the isobar are known as geostrophic wind.

Ans. Land and sea has different heating patterns. During the day the land heats up faster and becomes warmer than the sea. Because of the warm temperature over the land, the air rises giving rise to a low pressure area. On the other hand, the sea is relatively cool and the pressure over sea is relatively high. Thus, pressure gradient from sea to land is created and the wind blows from the sea to the land as sea breeze. In the night the reverse happens. The land loses heat faster and is cooler than the sea. The pressure gradient at nigh is from the land to the sea and the wind blows from the land to the sea as land breeze.

3. Answer the following questions in about 150 words.

(i) Discuss the factors affecting the speed and direction of wind.

Ans. Factors affecting the speed and direction of wind are:-

(ii) Draw a simplified diagram to show the general circulation of the atmosphere over the globe. What are the possible reasons for the formation of subtropical high pressure over 30o N and S latitudes? 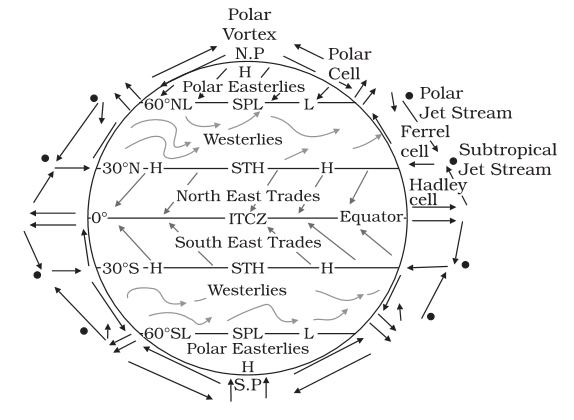 Ans. Along 30° N and 30° S exists high-pressure areas known as the subtropical highs. This pressure belts is not permanent in nature, it oscillate with the movement of the sun. Equator is the region of high insulation it receives ample of sun rays all throughout the year. As a result, equator is a low pressure zone. Wind in this region gets warm, and warm air rises. It goes up to a height of 14 km from the surface of the earth. The warm air moves towards 30° N and 30° S and sinks to the ground and forms subtropical high.

Possible reasons for the formation of subtropical high pressure are:-

Ans. Tropical cyclones typically form over large bodies of relatively warm water. They derive their energy through the evaporation of water from the ocean surface, which ultimately re-condenses into clouds and rain when moist air rises and cools to saturation.

The cyclones, which cross 20 degrees North latitude generally are more destructive. Torrential rains in high velocity winds are found in area around the eye of the cyclone. Wind velocity often reaches 250 km per hour. The diameter of the storm over the Bay of Bengal, Arabian sea and Indian ocean is between 600 – 1200 km. The cyclone creates storm surges and they inundate the coastal lowlands.

2017-11-04
Previous Post: Industrial Regions of North America – USA and Canada
Next Post: What Economics is all about?