In this article we will try understand what are Easterlies, Westerlies, Sub-tropical high pressure belts and Sub-polar low pressure belts. Actually this topic is part of NCERT Geography Class 11 Chapter 10 – Atmospheric Circulation and Weather Systems.

Without any further due, let’s begin: 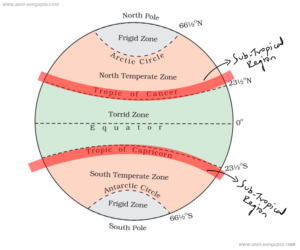 The earth’s atmosphere redistributes this heat imbalance through a complex set of atmospheric circulation patterns. The warm air at the low latitudes rises and moves toward the poles. The rising air, and the subsequent clouds and precipitation, cause the tropics to be very wet. In other words – as we go away from the equator towards the poles, temperature drops.

The warm air at the equatorial region rises up to a height of 10 to 15 km above the surface and moves towards the poles. On its way it comes down or sinks at the subtropical region. This pattern of atmospheric circulation from equator to subtropical region is called Hadley Cell. It is named after George Hadley who was a famous meteorologist and he proposed this mechanism. 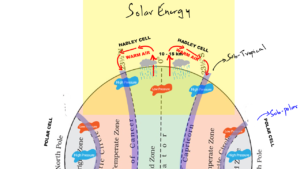 As the air moves towards the subtropics i.e. 30° N and 30° S, the air descends over the oceans and creates a high pressure zone. In the Northern Hemisphere, these high pressure systems are located over the North Pacific and North Atlantic oceans.

The famous Bermuda Triangle is also located at the North Atlantic Ocean and that’s a high pressure zone. So, if anyone asks you the secret of Bermuda triangle, this is the possible logical reason.

The air that moves from the equator towards subtropical region, that air is warm. And then you also have to understand, that there is cold air that is a flowing towards the low latitudes from the poles. You see atmospheric circulation redistributes the heat on earth and that means cold and warm air keeps moving from one place to another.

When cold air from the poles arrive towards the low latitude, and then we know that warm air from equatorial region moves towards the poles. What do you think will happen?

Cold and warm air collides, and they will collide at mid latitude which is the subtropical region.

When warm air meets cool air that’s when turbulence occurs, it’s a highly unstable situation for pilots and aviation industry. The air will converge meaning it will sink.

When air sinks and comes down closer to the surface it again gets divided into two parts. One part of the wind heads back to the equator and the other goes towards the pole. 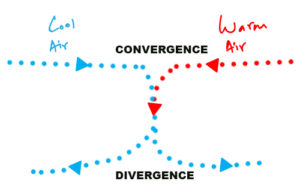 In between  50° – 70° N and S hemisphere which is at the border of temperate and frigid zone lies a low pressure belt which is known as the sub polar low. 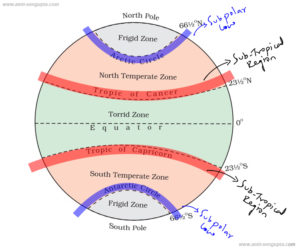 Now think for a while, all this time we read that low pressure is supposed to develop due to warm temperature. That is the case with the equator. Equator is warm, and warm air rises and that’s how low pressure belt is created near the equator.

But over here, it is supposed to be cold. From temperate zone it starts getting colder. So how is it that this region is called as sub-polar low pressure belt.

It sounds a little confusing right? The straight forward logic of temperature and its relation to pressure doesn’t seem to apply well over here. So what could be the reason? 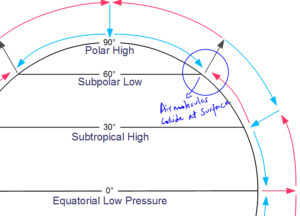 And when air rise it is associated with clouds and precipitation. You see its creating a similar condition that exists in the skies of equatorial region. That’s how it creates a low pressure zone which is called as sub-polar low. This pattern of atmospheric circulation from sub-tropical region to sub-polar region is called Ferrel Cell 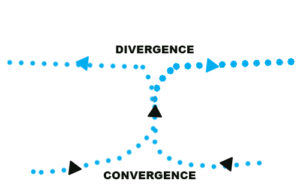 The air that rise at the sub-polar low, it gets further divided into two part – one goes towards extreme side of poles and the other goes towards subtropic. And that’s how a chain or loop is created where the air keeps moving from equator to poles and vice versa. 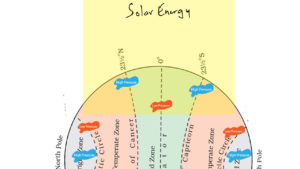 If a moving object is going from north or south towards the equator, it will deflect towards west which is due to Coriolis force. So easterlies, are prevailing winds that blow from the east to west in polar and tropical region.

If a moving object is going towards north or south from the equator, it will deflect towards east due to Coriolis force. So westerlies, are prevailing winds that blow from the west to east in between 30° – 60° N and S. 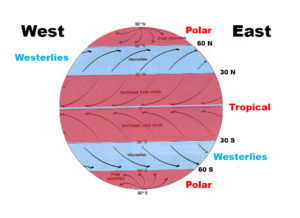