A writ is a formal written order issued by a body with administrative or judicial jurisdiction, this body is generally a court for enforcement of any of the fundamental rights conferred by part III of Indian Constitution under article 32
the Constitution of India empowers the supreme Court to Issue writs.

To enforce the Fundamental Rights, the supreme court is empowered under Article 32, to issue writs of various forms. The concept of issuing writ is taken from the UK . 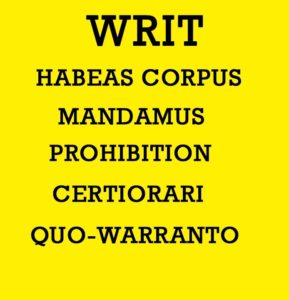 Writs are of five types and they are:-
1. Writs of Habeas Corpus
2. Writs of Mandamus
3. Writs of Prohibition
4. Writs of Certiorari
5. Writs of Quo Warranto

It is a Latin word which means (You have the body ). It commands an individual or a government official who has restrained another to produce the prisoner at a designated time and place physically before the court and justify the prisoner’s detention.If the prisoner argues successfully that the detention is in violation of a constitutional right,
the court may order the prisoner’s release. The aggrieved person can even claim for compensation against such action.

The habeas corpus concept was first expressed in the Magna Charta, a constitutional document forced on King John by English landowners at Runnymede on June 15, 1215. Among the liberties declared in the Magna Charta was that “No free man shall be seized, or imprisoned, or disseised, or outlawed, or exiled, or injured in any way, nor will we enter on him or send against him except by the lawful judgment of his peers, or by the law of the land.”

Mandamus is basically a Latin word, which means “We Command”. A writ of mandamus is an order from a court to an inferior government official ordering the government official to properly fulfill their official duties.This Writ of command is issued by the supreme Court or High Court when any government,court,corporation or any public
authority has to do a public duty but fails to do so. This Writ cannot be issued against the President and Governors

The writ of mandamus was first used by English courts in the early seventeenth century. It was than used in the courts of the American colonies, and the laws on it has remained largely the same

This kind of Writ is issued by the higher Courts to the lower courts or the quasi judicial bodies , directing the judge and the parties to cease the litigation because the lower court does not have proper jurisdiction to hear or determine the matters before it. The objective is to keep the inferior Courts or the quasi-judicial bodies within the limit of
their respective jurisdiction

Literally , Certiorari means to be certified.This Writ is issued by a superior appellate court against Courts or tribunals exercising judicial or quasi-judicial powers ordering it to produce a certified record of a particular case it has tried, in order to determine whether any irregularities or errors occurred . The purpose of this writ is to secure that the jurisdiction of an inferior court or tribunal is properly exercised and that it does not usurp the jurisdiction it does not possess.

Latin for “by what or authority ?” A writ quo warranto is used to ensure that the person holding a public office is qualified to hold the office. It is an extraordinary remedy by which a authority, who represents the public at large, challenges someone who has usurped a public office or someone who, through abuse or neglect, has forfeited an
office to which he was entitled.