Let’s get to know a little about Sanskrit:

It is an ancient language in Hinduism. It was used as a dialect by the old Indo-Aryans during the era of 2000 BCE. It is also called as Vedic Sanskrit, because of its origination during the vedic period. Vedic period originated around 1500 BCE, it is often referred to as Brahmanical period and later it came to be known as Hinduism. Hence we can also say that, Sanskrit is the traditional language of Hinduism and Brahminism.

Sanskrit is the mother of many Indian languages. As per the Indian Constitution, there are 22 languages that are officially followed in India and Sanskrit is one of them. The importance of Sanskrit can be recognized by the fact that – the Vedas, the Upanishads the Puranas and the Dharmasutra. These are secular and regional literature were written in Sanskrit. When we read about these languages and literature that were created in the past. It helps us in understanding our civilization better and also makes us appreciate the diversity and richness of our culture.

If we have to find out where did Sanskrit come from? It originated somewhere around 2000 BCE or may be a lot before that. Aryans arrived in India in the later part of 2000 BCE and were called as Indo-Aryans.

Indo-Aryans and their language and culture spread into northwest part India around 1500 BCE.

1500 BCE is also regarded as the beginning of Vedic period. If Sanskrit has to be traced, then it certainly had to belong to the linguistic ancestry of Proto-Indo-Iranian or Proto-Indo-European.

Because, before arriving to India and before getting the name Indo-Aryan. The Aryan race belonged to the European and western Asian heritage. During the later part of 2000 BCE, a vast majority of European language speakers came and rapidly spread across India.

If you look at this map you can see the Indo-European migrations.

As we know that the history of India begins with the Indus valley civilization and the coming of the Aryans. However, you must understand that before the arrival of Aryans, India was certainly not uninhabited.

Of course the Aryans made towns and cities around Ganges plain. We know that from the evidence collected and studied from the Indus Valley (Harappan) civilization. That’s all fair and true!

But if you look at the history of human habitation in India, the earliest sites goes back to 30,000 to 10,000 BCE. Some of the evidences are the rock shelters at Bhimbetka in Madhya Pradesh, Sanghao caves in Pakistan and the Edakkal caves in Kerala. 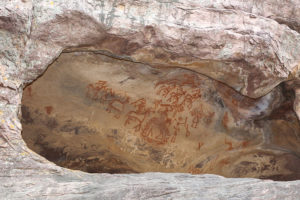 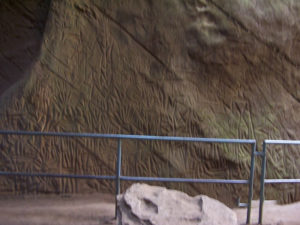 So in a nutshell people lived in India long before the Aryans arrived.

If you look and hear the Sanskrit language, it has “retroflex” sound like:- “dh” and “th”. You will not find that in Latin or any other Indo-European languages. That means, retroflex sound existed in India long before the arrival of Indo-Europeans.

Thus, when Aryans arrived in India they must have encountered local people, who came in to India long before them. Now, who were these local people we don’t know!

Were they Dravidians, or Tamilians, or the tribal Mundas / Adivasis. We have no idea about them.

That’s how we come to the conclusion that the Proto-Indo-European language became Vedic Sanskrit (around 2000 BCE) by mixing with local civilization (near Indus river). And the Vedic Sanskrit became classical Sanskrit around 1500 BCE.

Sanskrit in India was first embodied in the Rig Veda (one of the four Vedas). The Rig Veda was composed between roughly 1700–1100 BCE. It was Panini (a great grammarian and a scholar of Hinduism) who analysed Sanskrit and its word formations. He then wrote a text called Ashtadhyayi which was full of long descriptive Sanskrit grammar. 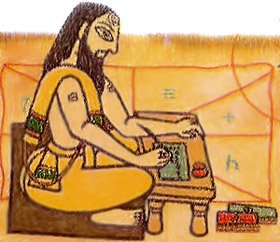 So, thanks to Panini for improving the grammar of Sanskrit.

After Vedas, Sanskrit was used in composing Upanishads around 800-200 BCE. Then, ideas such as Dharma and Karma came through Upanishads and Buddhist literature.

Initially Buddhist scriptures were all written in Sanskrit. The initial Buddhist writings have rich literature of the Mahayana school and the Hinayana school. Later, Buddha opposed the use of Sanskrit and asked his followers to use vernacular language which was Pali. Pali sounds closely related to the old Indo-Aryan Vedic Sanskrit, but it has no direct descendant from it.

The most important work of the Hinayana school is the Mahavastu which is a storehouse of stories. While the Lalitavistara is the most sacred Mahayana text which supplied literary material for the Buddhacharita of Asvaghosa.

Sanskrit is perhaps the only language that kept evolving even beyond the barriers of regions and boundaries. From the north to the south and the east to the west there is no part of India that has not contributed to or been affected by this language.