(i) Which one of the following type of resource is iron ore?

(ii) Under which of the following type of resource can tidal energy be put?

(iii) Which one of the following is the main cause of land degradation in Punjab?

(a) Intensive cultivation (b) Deforestation (c) Over irrigation (d) Overgrazing

(iv) In which one of the following states is terrace cultivation practised?

(v) In which of the following states is black soil found?

(a) Jammu and Kashmir (b) Gujarat (c) Rajasthan (d) Jharkhand

Answer the following questions in about 30 words.

1.  Name three states having black soil and the crop which is mainly grown in it.

2.  What type of soil is found in the river deltas of the eastern coast? Give three main features of this type of soil.

Ans. The rivers that forms the deltas of eastern coast are:- the Mahanadi, the Godavari, the Krishna and the Kaveri. These river deltas consists of alluvial soil.

The main feature of alluvial soil are:-

3.  What steps can be taken to control soil erosion in the hilly areas?

Ans. Ploughing along the contour lines can decelerate the flow of water down the slopes. Steps can be cut out on the slopes making terraces. Terrace cultivation restricts erosion. Strips of grass are left to grow between the crops. This breaks up the force of the wind. Planting lines of trees which are called shelter belts. They help in stabilization of sand dunes and in stabilizing the desert in western India.

4  What are the biotic and abiotic resources? Give some examples.

Ans. Biotic Resources:- are those resources which are obtained from biosphere and have life such as human beings, flowers, animals, fisheries, livestock etc.

Abiotic Resources:- are those resources which are made up of non-living things. For example – rocks and metals.

3. Answer the following questions in about 120 words.

(i) Explain land use pattern in India and why has the land under forest not increased much since 1960-61?

Ans.  The use of land is determined in two ways –

Forest area in the country is far lower than the desired 33 per cent of geographical area. And the reason it has not increases is because of the growing demand of the population that has resulted in increased demand for land for various purposes like agriculture and other non agricultural purposes like building roads, infrastructure etc. 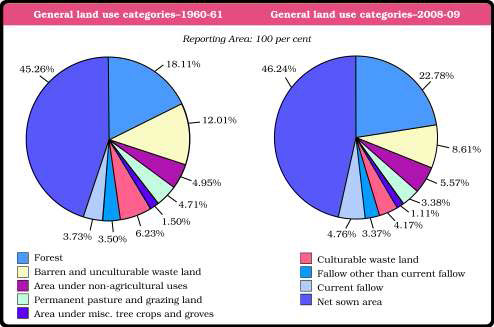 (ii) How have technical and economic development led to more consumption of resources?

Ans. Technical and economic development has led to more consumption is the following manner:-