What is a Nuclear Power Plant?

A nuclear power plant is a thermal power station in which the heat source is a nuclear reactor. The heat is then used to generate steam which drives a steam turbine connected to an electric generator which produces electricity. Heat is generated by splitting the Uranium atoms which is also known as Nuclear Fission (division or splitting into two or more parts).

How does a Nuclear Power Plant work

A nuclear power plant basically converts the heat generated by splitting the Uranium atoms in to electricity. It works exactly like conventional power plant, but it uses atoms to produce heat energy rather burning coal, oil or gas. The heat generated is then used to boil water, so that steam is produced. Steam is required because it drives giant turbines that are connected to big generators and these generators produce electricity. Here is how it all works:- 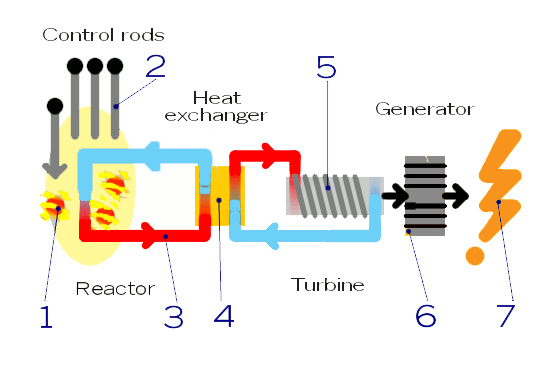 1. Uranium is loaded in the reactor. A nuclear reactor is a large dome which is made up of reinforced concrete to protect it from getting exploded. At the core of the reactor, Uranium atoms split and release heat energy. This is called Nuclear Fission.

2.  When Uranium atoms split, it releases neutrons which are neutrally charged. With the help of control rods, neutrons are soaked up in order to slowdown the chain reaction. These control rods are made of materials like –  cadmium and boron.

3. Water is then pumped into the reactor to collect the heat energy. Water flows around the reaction constantly in a looping motion. That’s how heat is carried by the water.

4. The water from the reactor gives up its energy to cooler water flowing in another closed loop, turning it into steam. Using two unconnected loops of water and the heat exchanger helps to keep water contaminated with radioactivity safely contained in one place and well away from most of the equipment in the plant.

5. The steam from the heat exchanger is piped to a turbine. As the steam blows past the turbine’s vanes, they spin around at high speed.

6. The spinning turbine is connected to an electricity generator and makes that spin too.

7. The generator produces electricity that flows out to the power grid—and to our homes, shops, offices, and factories.

In India, Nuclear power is the fourth-largest source of electricity after thermal, hydroelectric and renewable sources of electricity. As of now India has 21 nuclear reactors operating in 7 nuclear power plants located at 6 states. These states are:- Rajasthan, Gujarat, Maharashtra, Karnataka, Tamil Nadu and Uttar Pradesh.