(a) What is the true shape of the earth?

Ans. The earth is slightly flat near the poles and bulges at the center.

Ans. A globe is a three-dimensional, spherical, scale model of Earth (terrestrial globe or geographical globe) or other celestial body such as a planet or moon. While models can be made of objects with arbitrary or irregular shapes, the term globe is used only for models of objects that are approximately spherical. The word “globe” comes from the Latin word globus, meaning round mass or sphere. Some terrestrial globes include relief to show mountains and other features on the Earth’s surface.

(c) What is the latitudinal value of the Tropic of Cancer?

Ans. The Tropic of Cancer is the circle marking the latitude 23.5 degrees north, where the sun is directly overhead at noon on June 21, the beginning of summer in the northern hemisphere

(d) What are the three heat zones of the Earth? 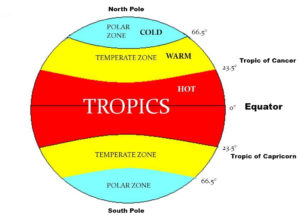 (e) What are parallels of latitude and meridians of longitude?

Ans. They imaginary lines running on the globe divides it into two equal parts.

(f) Why does the torrid zone receive maximum amount of heat?

Ans. The area between the Tropic of Cancer and the Tropic of Capricorn is known as the Torrid Zone. The mid-day Sun is exactly overhead at least once a year on all the latitudes in this area; hence, this area receives maximum amount of heat.

Ans. In London, the Greenwich Mean Time (GMT) is followed. The Indian Standard Meridian is located 82½° east of the Prime Meridian. That is why, when it is 12 noon in London, it is 5.30 P.Mvv. in India. As we know the earth rotates form west to east the sun rays first fall on the eastern most longitudes.

(a) The value of the prime meridian is

(b) The frigid zone lies near

(i) the Poles (ii) the Equator (iii) the Tropic of Cancer

(c) The total number of longitudes are

(d) The Antarctic circle is located in

(i) the Northern hemisphere

(e) Grid is a network of

(i) parallels of latitudes and meridians of longitudes

(iii) the North Pole and the South Pole