Question numbers 1-7 are very short answer questions carrying 1 mark each. Answer to each of these questions should not exceed 40 words.

1. Why is Kobe – Osaka region of Japan very thickly populated ? Give one reason.

Ans. The Kobe-Osaka region of Japan is thickly populated because of the presence of a number of industries like:- electronics, pharmaceutical, machinery, device, chemical, food, and construction industries. This region is the second most populated in Japan after Tokyo.

2. What is the meaning of empowerment under the concept of human development ?

Ans. Empowerment is one of the four pillars of human development. The other three are:-  equity, sustainability, productivity. Empowerment means to have the power to make choices. Power comes from increasing freedom and capability. Good governance and policies are required to empower people.

Ans. The regions where farmers specialize in vegetables only, the farming is know as truck farming. The distance of truck farms from the market is governed by the distance that a truck can cover overnight, hence the name truck farming.

4. What is an inland seaport ?

Ans. Transportation of cargo and passengers through rivers, canals, lakes and coastal areas on a boat or a streamer is done via a inland seaport. Very heavy cargo like coal, cement, timber and metallic ores can be transported through inland waterways.

5. “Rural to Urban migration causes serious environmental problems.” Give an argument to support the statement.

Ans. People migrate from rural areas to urban areas mainly due to better opportunities, availability of regular work and relatively higher wages. Better opportunities for education, better health facilities and sources of entertainment, etc. It also leads to unplanned growth of urban settlement and formation of slums shanty colonies. Due to over-population, cities are facing the acute problem of depletion of ground water, air pollution, disposal of sewage and management of solid wastes.

6. “Development is Freedom.” Explain the statement.

Ans.  Development is all about enlarging people’s choices in order to lead long, healthy lives with dignity. The basic goal of development is to create conditions where people can live meaningful lives. It is the most important aspect of human development. Very often, people do not have the capability and freedom to make even basic choices. This prevents them from leading healthy lives, being able to get educated or to have the means to live a decent life. Hence development gives people a sense of freedom by increasing their choices to live a decent life.

7. “Indian railways are highly valuable in bringing the people of diverse cultures together.” Justify.

Ans. Railways are a mode of land transport for bulky goods and passengers over long distances. Commuter trains are very popular in U.K., U.S.A, Japan and India.  These carry millions of passengers daily to and fro in the city. There are about 13 lakh km of railways open for traffic in the world.

Question numbers 8-13 are short answer questions carrying 3 marks each. Out of which one question is a value based question. Answer to each of these questions should not exceed 80-100 words.

8. “The physical environment has been greatly modified by human beings, in turn it has also impacted human lives.” Explain the statement.

Ans. This statement- “The physical environment has been greatly modified by human beings, in turn it has also impacted human lives” absolutely make sense because houses, villages, cities, road-rail networks, industries, farms, ports, items of our daily use and all other elements of material culture have been created by human beings using the resources provided by the physical environment.

9. Describe the socio-cultural problems associated with urban settlements in the developing countries.

10. Study the following table carefully and answer the questions that follow : 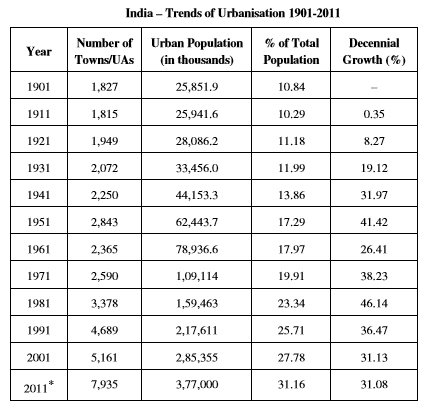 (10.1) In which decade the growth rate of urban population was lowest in the country ?

(10.2) In which year the decennial growth rate of urban population was the highest ?

11. Explain the causes of degradation of cultivable land in India.

Ans. The main reasons behind degradation of cultivable land in India are:-

12. Assess the values of minerals for the social and economic development of India.

Ans. India is endowed with a rich variety of mineral resources due to its varied geological structure.  The vast alluvial plain tract of north India is devoid of minerals of economic use. The mineral resources provide the country with the necessary base for industrial development.

13. “The polluted water is a source of various water borne diseases.” Explain.

Ans. The per-capita availability of water is reducing day by day due to increase in population. The available water resources are also getting polluted with industrial, agricultural and domestic effluents, and this, in turn, is further limiting the availability of usable water resources. Water gets polluted by foreign matters such as microorganisms, chemicals, industrial and other wastes.  When toxic substances enter lakes, steams, rivers, ocean and other water bodies, they get dissolved or lie suspended in water. Such matters deteriorate the quality of water and render it unfit for human use.

Question numbers 14-20 are long answer questions carrying 5 marks each. Answer to each of these questions should not exceed 150 words.

14. Define age-sex structure. Describe the factors responsible for imbalances in the age- sex ratio in different countries of the world.

Ans. The age-sex structure of a population refers to the number of females and males in different age groups. Factors responsible for imbalances in the age- sex ratio in different countries of the world are:-

15. Explain the characteristics of modern large scale manufacturing in the world.

Rural marketing centres – These cater to nearby settlements. These are quasi-urban centres. They serve as trading centres of the most rudimentary type. Here personal and professional services are not well-developed. Most of these have mandis (wholesale markets) and also retailing areas.

Urban marketing centres –  They have more widely specialized urban services. They provide ordinary goods and services as well as many of the specialized goods and services required by people. Urban centres, therefore, offer manufactured goods as well as many specialized markets develop, e.g. markets for labour, housing, semi or finished products. Services of educational institutions and professionals such as teachers, lawyers, consultants, physicians, dentists and veterinary doctors are available.

17. Study the given map and answer the questions that follow : 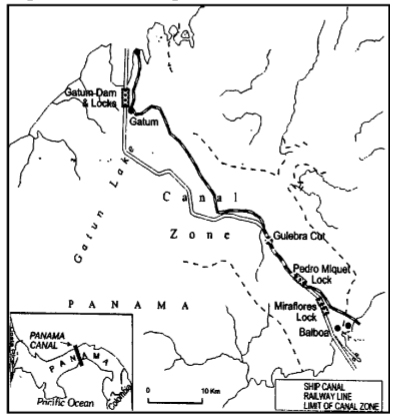 (17.1) Which oceans are connected by the Panama Canal ?

(17.3) Explain the significance of this canal to the economies of America.

Ans. The Panama Canal was built to shorten the distance that ships had to travel to pass between the Atlantic and Pacific Oceans. The canal permits shippers of commercial goods, ranging from automobiles to grain, to save time and money by transporting cargo more quickly. Many U.S exports and imports travel through the canal daily. Any disruption in the flow of goods through the Panama Canal could directly hurt the U.S. and global economies. If the canal is not operating, then the operating expenses would significantly increase and hurt global economy.

18. Explain the role of climate and physical features on the distribution of population in India.

Ans. The role of climate and terrain largely determines the pattern of the population distribution in India.  We observe that the North Indian Plains, deltas and Coastal Plains have higher proportion of population than the interior districts of southern and central Indian States, Himalayas, some of the north eastern and the western states.

However, development of irrigation in Rajasthan, availability of mineral and energy resources in Jharkhand and development of transport network in Peninsular States have resulted in moderate to high proportion of population in areas which were previously very thinly populated.

19. “The conservation and management of water resources is essential for sustainable development in India.” Examine the statement.

Ans. Since there is a reduction in availability of fresh water and rising demand, the need has arisen to conserve and efficiently manage this precious life giving resource for sustainable development. Given that water availability from sea/ocean, due to high cost of desalinization, is considered inconsiderable, India has to take quick steps and make effective policies and laws, and adopt effective measures for its conservation. Besides developing water saving technologies and methods, efforts are also made to prevent the pollution. There is a need to encourage watershed development, rainwater harvesting, water recycling and reuse, and conjunctive use of water for sustaining water supply in long run.

20. Study the following table carefully and answer the questions that follow :

(20.1) Which item of export has constantly shown the downward trend ?

(20.3) Explain the causes for the constant upward trend in the exports of crude and petroleum products.

Question numbers 21 and 22 are related to identification or locating and labeling of geographical features on maps carrying 5 marks each.

21. Identify the five geographical features shown on the political outline map of the world as A, B, C, D and E and write their names correctly on the lines marked near them with the help of the following information :

(A) An area of nomadic herding.
(B) An important seaport.
(C) An international airport.
(D) Trans-Continental railway.
(E) An area of very high density of population. 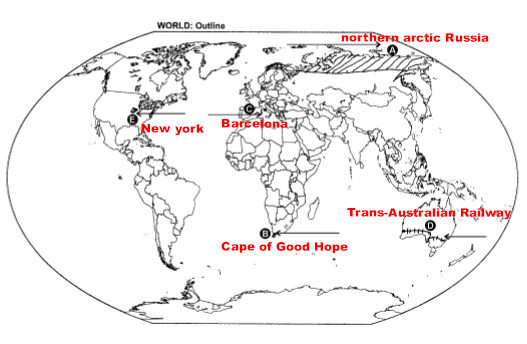 22. Locate and label the following features with appropriate symbols on the given political outline map of India :

(i) The state with lowest percentage of urban population.
(ii) The leading tea producing state.
(iii) The integrated steel plant in Odisha.
(iv) The headquarter of South Central Railway Zone.
(v) The city with more than 10 million population in Eastern India. 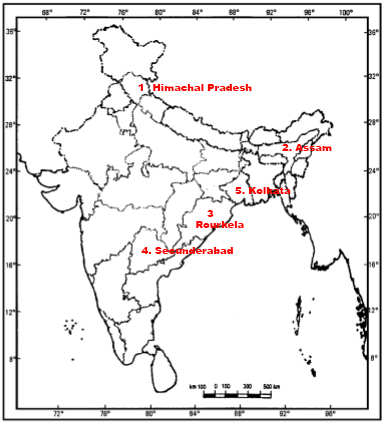