Big bang theory is the modern theory in terms of the origin of earth. If you remember how nebular hypothesis is the early theory and in that we read about the formation of sun, stars, planets, asteroids etc, in Big Bang theory scientists decided – “let’s look at the larger picture, let’s find out how the universe came into existence”. So whenever you hear the word Big Bang, you must immediately recollect that it is about the expanding universe hypothesis. So basically it is an effort to explain what happened at the very beginning of our universe.

So how did we come to this conclusion? In 1920, Edwin Hubble, provided evidence that the universe is expanding. Edwin Hubble is the same guy after whom the famous Hubble space telescope is named. He said, As time passes, galaxies move further and further apart.

There is an experiment associated with it. Take a balloon and mark some points on it to represent the galaxies. Now, if you start inflating the balloon, the points marked on the balloon will appear to be moving away from each other as the balloon expands. Similarly, the distance between the galaxies is also found to be increasing and thereby, the universe is considered to be expanding. But i want you to also notice this, besides the increase in the distances between the points on the balloon, the points themselves are expanding. But in reality the scientists had no real evidence about the expansion of galaxies, but they do believe that the distances between galaxies is increasing. Hence we can say that the balloon example is only partially correct. 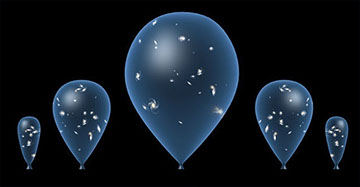 The Big Bang Theory considers the following stages in the development of the universe. In the beginning, all matter forming the universe existed in one place in the form of a “tiny ball” that is singular atom with an unimaginably small volume, infinite temperature and infinite density. Well to be honest, Where did it come from? We don’t know. Why did it appear? We don’t know. It is thought to exist at the core of “black holes”. Black holes are areas of intense gravitational pressure. The pressure is thought to be so intense that finite matter is actually squashed into infinite density (it’s a mathematical concept which truly boggles the mind). 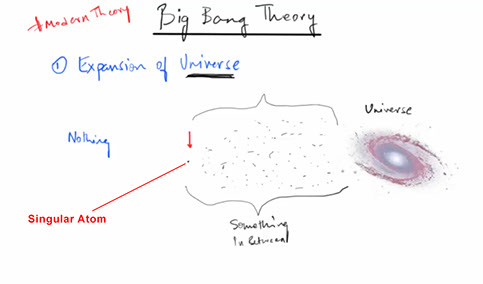 After that, this “tiny ball” exploded violently. This led to a huge expansion. The Universe that we know was born. Time, space and matter all began with the Big Bang. In a fraction of a second, the Universe grew from smaller than a single atom to bigger than a galaxy. And it kept on growing at a fantastic rate. It is still expanding today. It is now generally accepted that the event of big bang took place 13.7 billion years before the present. Now within the 1st second of the big bang some energy was converted in to matter and antimatter. These two opposite types of particles largely destroyed each other. But some matter survived. More stable particles called protons and neutrons started to form. Protons are positively charged and electrons are negatively charged particles.

Over the next three minutes, the temperature dropped below 1 billion degrees Celsius. It was now cool enough for the protons and neutrons to come together, basically attract to form hydrogen and helium nuclei.

After 300 000 years, the Universe had cooled to about 4000 degrees. Atomic nuclei could finally capture electrons to form a fully fledged atoms. Then the Universe became transparent and got filled with clouds of hydrogen and helium gas. So this is the story of the universe, otherwise known as the big bang theory.