(i) What is agriculture?

Ans. Agriculture is a primary activity. It includes growing crops, fruits, vegetables, flowers and rearing of livestock.
Two-thirds of India’s population is still dependent on agriculture.

Ans. Agricultural activity is concentrated in those regions of the world where suitable factors for the growing of crops exist. Those factors are:- Favorable topography of soil and climate.

(iii) What is shifting cultivation? What are its disadvantages?

Ans. Shifting cultivation:- A plot of land is cleared by cutting the trees and burning them. The ashes are then mixed with the soil and crops like maize, yam, potatoes and cassava are grown. After the soil loses its fertility, the land is abandoned and the cultivator moves to a new plot. Shifting cultivation is also known as ‘slash and burn’ agriculture.

(iv) What is plantation agriculture?

Ans. It is a commercial farming where single crop of tea, coffee, sugarcane, cashew, rubber, banana or cotton are grown. Large amount of labour and capital are required. Development of a transport network is essential for plantation agriculture.

(v) Name the fibre crops and name the climatic conditions required for their growth.

Ans. Jute and cotton are fibre crops. They grow well on alluvial soil and requires high temperature, heavy rainfall and humid climate. This crop is grown in the tropical areas.

(i) In India agriculture is a primary activity.

Ans. Agriculture is a primary activity because two-thirds of India’s population is still dependent on agriculture. Agriculture and its allied activities act as main source of livelihood for more than 80% population. One-third of our National income comes from agriculture.

Ans. Agriculture has developed at different places in different parts of the world. Agricultural activity is concentrated in those regions of the world where suitable factors for the growing of crops exist. Those factors are:- Favorable topography of soil and climate. 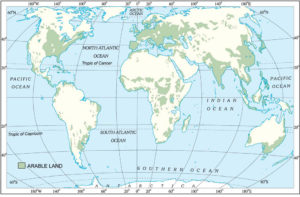 4. Distinguish between the followings.

Ans. Primary activities include all those connected with extraction and production of natural resources.
Agriculture, fishing and gathering are good examples. Secondary activities are concerned with the processing
of these resources. Manufacturing of steel, baking of bread and weaving of cloth are examples of this activity.

Intensive farming:- In this type of farming the farmer cultivates a small plot of land using simple tools and
more labour. Climate with large number of days with sunshine and fertile soils permit growing of more than one crop annually on the same plot. Rice is the main crop. Other crops include wheat, maize, pulses and oil seeds. It is practiced in thickly populated areas of the monsoon regions of south, southeast and east Asia.