How did Hinduism originate?

Hinduism did not develop from the teaching of any one single founder, unlike Christianity and Buddhism. Moreover, the Hindu tradition is diverse  and has a long history of around 3000 years. Wherein, it has developed tremendously over the course of time.

The term Hindu originally referred to those living on the other side of the Indus River. 3000 years ago, the Persians and the Greeks who came through the northwest were familiar of the Indus river. They called it the Hindos or the Indos, and the land to the east of the river was called India. However, Hindu as a religion came into existence around 1500 BCE and was worshiped by the Indo-Aryans.

What’s more important is that:

Hindu as a religion is based upon the principles of Vedas. Vedas are also the holy books of the Hindu religion. There are four Vedas:-

Each Vedas have sub categories and that’s how the entire Hindu philosophy has been scripted in these four Vedas. However, Hinduism is not based on a single text unlike the Christian and Islamic religion which have Bible and Khuran. The lack of a singular text also makes Hinduism a difficult religion to define.

Gods and goddesses in Hinduism

Within the Hindu pantheon, there are a number of gods, goddesses and deities. But one entity is supreme and that is Brahman. Brahman means supreme self, it is beyond time and space. Some might even call it higher power, from which everything came into being. As per the Hindu mythology, there are three important gods:-

Hence for Hindus the ultimate way of reaching Moksh or salvation is knowing the fact that everything is a union. Everything is essentially Brahman.

Bhakti: Another important aspect of Hinduism

Since Hindu religion is closely associated with the concept of Bhakti. Bhakti means devotion, honor, love for god. To show their bhakti, worshipers often do puja and darshan. That is why, apart from Brahma, Vishnu and Shiva, there are numerous gods and goddesses like:- Ganesha, Durga etc. Each god has different power and role and they are called as Ishtadeva. In simple terms, ishtadeva denotes a worshiper’s preferred or beloved divinity or deity to which he/she personally relates.

Beyond darshan, a Hindu worshiper also makes offerings. It can be in the form of offering ghee, milk, oil, flower, garlands etc. All of this is understood through Hindu Dharma. For the Hindus, Dharma means nyaya (justice). It has guidelines as to what is right, what is wrong, moral values, righteous conduct. It basically explains why things are and why they should be—there must be order in everything including society.

And this is how the idea of the caste system came into existence in Hinduism. There is a term to it, it is called Varna. Varna means an individual’s ranking in the social caste system which is dependent on ones karma.

For Hindus, karma originally began as a purely ritual act, which was the act of making sacrifice/offerings to the sacred fire/gods. In Hindu relegion, Brahmins has access to the sacred fire, as they occupy the highest social rank in the society. Brahmins refers to an elite caste, which includes priests, scholars, teachers, etc. 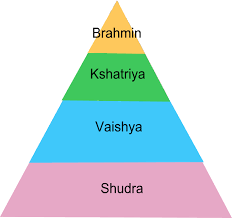 The other Varnas are:-

Those who did not belong to any of the Varna were called as Avarna. In present day context, they are the Dalits and Schedule Tribes.

I probably don’t need to say this, but I will anyway: